Albuquerque is the largest city in New Mexico and is the county seat of Bernalillo County. It’s a vibrant city in north central New Mexico known for education, research, military and technology.

The city owes a lot to Route 66 as much as anything, being one of the signature cities on the route. As well as local military bases and transport, there is a lot going on in this city whether you’re here to work, rest or play.

Albuquerque was founded in 1706 as a Spanish settlement on the banks of the Rio Grande. It was named after the Duke of Albuquerque, which created one of its nicknames, ‘The Duke City’.

Before that, the area was inhabited for thousands of years as demonstrated at the Petroglyph National Monument. Various native tribes called the region home before the arrival of the Spanish.

After the Mexican-American war, a garrison and quartermaster’s depot were built. The arrival of the Atchison, Topeka and Santa Fe Railroad started the next chapter in the city’s history by bypassing the historical center in favor of a new location 2 miles east.

From there, people began arriving from all over to set up home, store or community. More recently, the arrival of Kirtland Air Force Base, Sandia Base and Sandia National Laboratories boosted the city further. 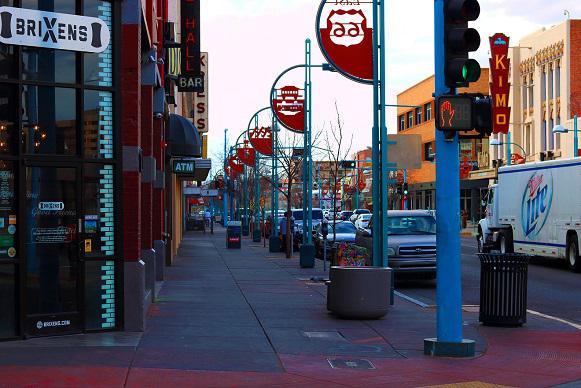 The city has plenty of transport options thanks to its history as a transportation hub.

You’ll fly into Albuquerque International Sunport (ABQ) if you arrive by air which is a few miles outside the city center. It is linked to the city via road and rail and runs regular shuttles.

Rails services include Amtrak’s Southwest Chief that stops at the Alvarado Transportation Center.

Road links are plentiful and include I-25, I-40, Route 66 and local routes throughout the region.